How Do You Pronounce Pecan?

It’s a Southern Thing, is a new social brand celebrating everything southern—from food, culture and places, to all other aspects of Southern life. Priester’s Pecans is an Alabama-based retail store and e-commerce company, selling a variety of pecans and Southern goods. The challenge was to create content marketing naturally weaving in the Priester’s Pecans marketing message while intriguing the audience. To answer this challenge, we created a fun debate video: How Do You Say “Pecan”?

Find out how Alabama Media Group was able to show the Priester’s Pecan brand to a new audience in a unique way.

Reach a new audience in a unique way, encourage them to interact with the brand

The objective of this campaign was to show the Priester’s Pecan brand to a new audience in a unique way. Rather than trying a more traditional TV commercial, we wanted the viewers to give their opinion and interact with the brand. We also wanted to further establish Priester’s Pecan’s social presence, by showing their message to an audience that had not reached before. This video put them in front of a larger audience both from a numbers and geographic perspective.

The deliverables on this project included full production of a video custom-concepted for the client (of which they own the finished asset to reuse/repurpose if they choose), and access to our audience on the It’s a Southern Thing platform of more than 35 million people across the south and beyond. When the video was posted, they received social tagging, a custom written post including their website URL, brand representation throughout the video, and product placement. 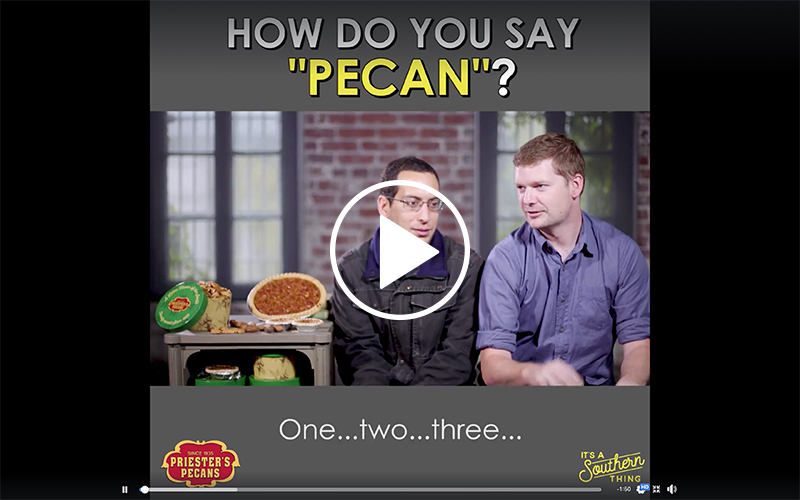 We posted this video to the It’s a Southern Thing platform twice. We first posted in mid-October, and again the week before Thanksgiving for additional reach.

Discover how our digital expertise can help propel your business forward.